Celebrate Easter with the specialist for authentic tours on Zakynthos, Nefis Travel! We will organize different tours to the different Easter events, always with that little extra personal touch by Nefis Travel Zakynthos. Please email info@nefis-travel.com for more information and prices.

Easter, is the most sacred celebration in the Greek Orthodox Church and live style of the Greeks. The Preparations and customs, connected to Easter have remained proudly in the Modern Greek life. Preparations for Easter come to a climax toward the end of Holy Week, between Palm Sunday and Easter. This is called Megali efdomada, the holy big week. Church services are announced every day by the enchanting sound of the church bells.

The Saturday before the Holy Week is when the Orthodox Church commemorates a major feast of the year. This is to celebrate the miracle of Jesus raising Lazarus from the dead after lying in the tomb for four days. This feast occurs at the end of the forty days of lent and is combined with the celebration of Palm Sunday. Baking lazarakia to eat at Lazarus Saturday is a tradition practiced in Greece. The bread is mildly sweet Lenten bread made with sweet-smelling spices that looks like Lazarus bound up in grave clothes.

Today’s Palm Sunday marks the beginning of Holy Week, which ends on Easter. Palm Sunday is associated with Jesus’ triumphal entry into Jerusalem. In Greece we have the custom to have fish for meal this Sunday. As the Greek Orthodox Church allows the faithful to consume fish, oil, and wine but not dairy products, eggs, chicken and red meat, as it is still Sarakosti (40 days of Lent). The churches will be decorated and the Greeks will carry palms like the crowd did in front of Jesus as he passed through into the Jerusalem. The faithful are normally given bay leaves and woven palm (Vagia) crosses. Many people also believe that bay leaves blessed on Palm Sunday and later burnt could restore health to those that had fallen sick and also safeguard the health of farm animals.

In many places the Vagia was also given in the shape of a fish, as fish is seen as one of the earliest symbols of Christianity as the first Christians used the word “IXTHIS” (Ancient Greek word for fish), which is said to be derived from Jesus Christ, the Son of God: ΙΧΘΥΣ – Ιησούς Χριστός Θεού Υιός Σωτήρ. 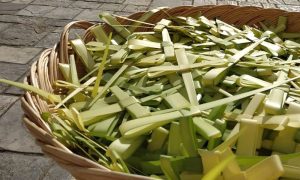 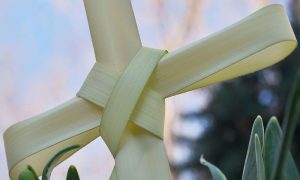 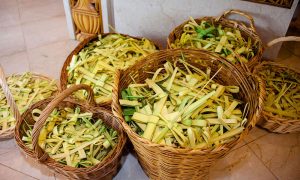 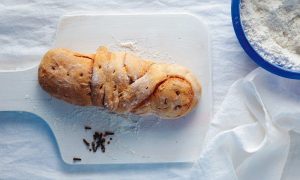 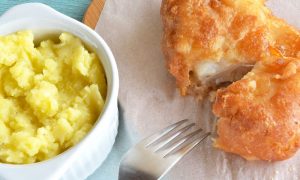 Easter preparations begin on Holy Thursday when the traditional Easter bread, tsoureki is baked and eggs are dyed red (red is the color of life as well as a representation of the blood of Christ). From ancient times, the egg has been a symbol of the renewal of life, and the message of the red eggs is victory over death. Holy Thursday evening, church services include a symbolic representation of the crucifixion, and the period of mourning begins. In many villages – and in cities as well – women will sit in church throughout the night, in traditional mourning.

The holiest day of Holy Week is Holy Friday. It is a day of mourning, not of work (including cooking). It is also the only day during the year when the Divine Liturgy is not read. Flags are hung at half-mast and church bells ring all day in a slow mournful tone. Many devout do not cook on Holy Friday, but if they do, traditional foods are simple, perhaps boiled in water (no oil) and seasoned with vinegar – like beans – or thin soups like tahinosoup, a soup made with tahini.( sesame seeds) Traditionally, women and children take flowers to the church to decorate the Epitaphio (the symbolic bier of Christ). The Service of Lamentation mourns the death of Christ and the bier, decorated lavishly with flowers and bearing the image of Christ, is carried on the shoulders of the faithful in a procession through the community to the cemetery, and back. Members of the congregation follow, carrying candles. 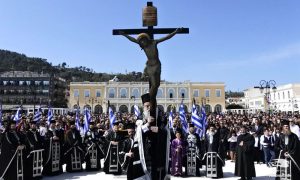 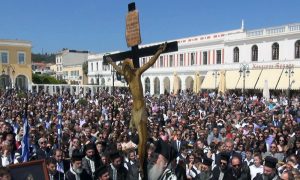 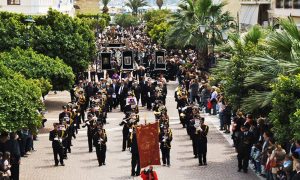 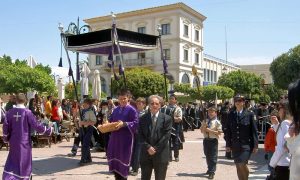 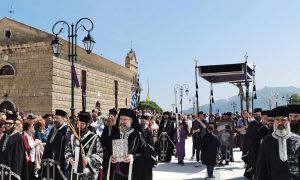 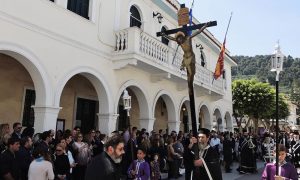 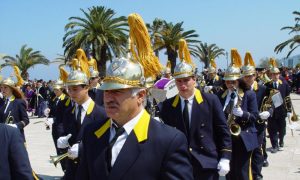 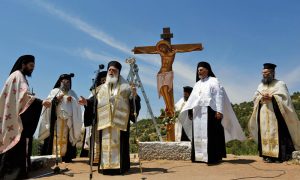 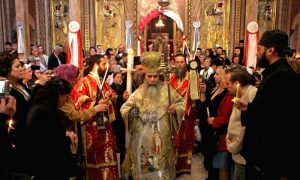 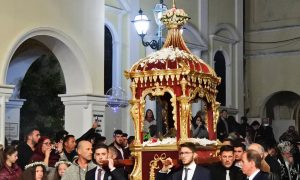 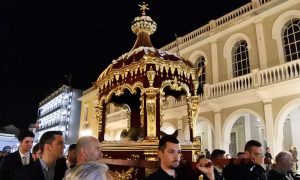 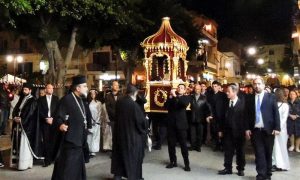 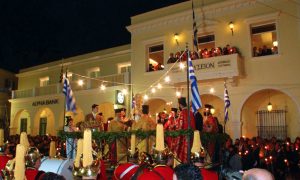 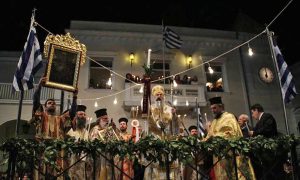 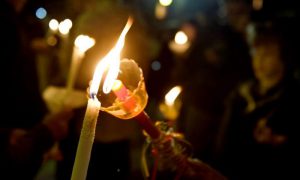 On Holy Saturday, the Eternal Flame is brought to Greece by military jet, and is distributed to waiting Priests who carry it to their local churches. The event is always televised and if there’s a threat of bad weather or a delay, the entire country agonizes until the flame arrives safely.

On the morning of Holy Saturday, preparations begin for the next day’s Easter feast. Dishes that can be prepared in advance are made, and the traditional mayiritsa soup prepared, which will be eaten after the midnight service.

The midnight Service of the Resurrection is an occasion attended by everyone who is able, including children, each holding a white candle. Special candles made for Easter are called “labatha” (lah-BAH-thah) and are often given as gifts to children from their parents or God-parents. These candles can be lavishly decorated with favorite children’s heroes or storybook characters, and may be as much as three feet tall, but the candle itself is usually white. These candles are only used for one Easter midnight service. Crowds are so big that churches fill to overflowing as anticipation mounts. Shortly before midnight, all lights are extinguished and churches are lit only by the Eternal Flame on the altar. When the clock passes midnight, the Priest calls out “Christos Anesti” (Christ is risen), and passes the flame, the light of the Resurrection, to those nearest him. The flame is then passed from person to person, and it isn’t long before the church and courtyard are filled with flickering candlelight. The night air is filled with the singing of the Byzantine Chant ‘Christos Anesti” and the “fili tis Agapis” (kiss of Agape) and wishes are exchanged.

As is the custom, as soon as “Christos Anesti” is called out, church bells ring joyously non-stop, ships in ports all over Greece sound their horns, floodlights are lit on large buildings, and great and small displays of fireworks and noisemakers are set off.

Traditional Easter Wishes Once the Priest has called out “Christos Anesti,” friends and neighbors exchange the same, saying “Christos Anesti” and, in response, “Alithos Anesti” (truly, He is risen) or “Alithinos o Kyrios” (true is the Lord).

It is the custom to carry the Eternal Flame home and use it to make the sign of the cross on the door frame in smoke. The smoke cross is left there throughout the year, symbolizing that the light of the Resurrection has blessed the home. The candles are used to light icon candelabra, and are put on the table for the midnight meal. The sight of hundreds of candle flames moving from churches to homes on that night is beautiful, indeed. Once home, everyone gathers around the table for a traditional meal to break the fast, which includes the mayiritsa soup, tsoureki (sweet bread), and the red eggs. But before the eggs are eaten, there’s a traditional challenge: “tsougrisma.” Holding your egg, you tap the end against the end of your opponent’s egg, trying to crack it. It’s a game enjoyed by children and adults alike. Eggs are often made in very large quantities since the game continues on the next day with more friends and family. 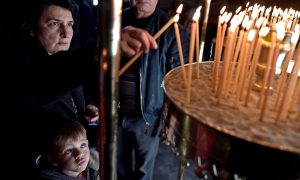 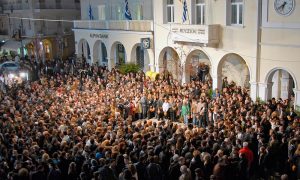 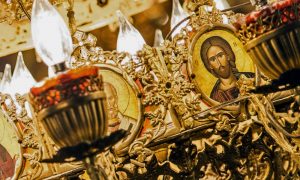 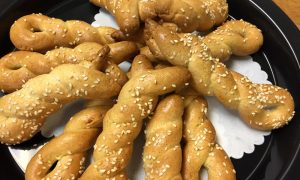 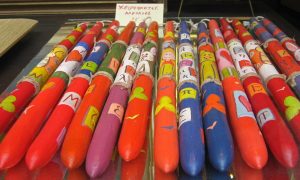 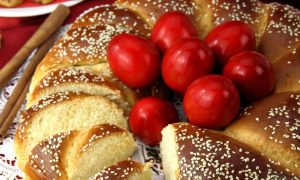 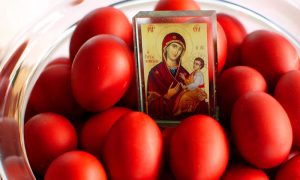 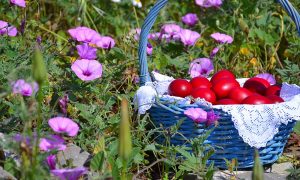 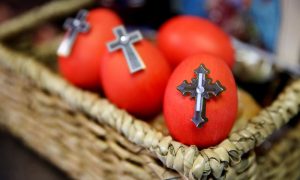 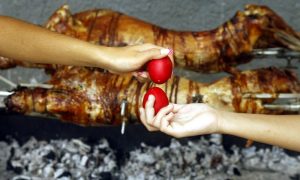 At dawn (or earlier) on Easter Sunday, the spits are set to work, and grills are fired up. The customary main attraction of the day is whole roasted lamb or goat (kid) to represent the Lamb of God, however many prefer oven and stovetop lamb or kid dishes. Ovens are filled with traditional accompaniments and all the trimmings. Great Greek wines, ouzo, and other drinks flow freely, and preparations for the meal turn into festive celebrations even before the eating begins. These high-spirited gatherings often last long into the night.

Another national holiday, Easter Monday is a day to take things slowly, and certainly a day filled with delicious leftovers!