Through the centuries, Zakynthos has developed a rich culture, deeply influenced by the Renaissance and the Enlightenment period.

Poetry and Literature of the island Zakynthos, Zante

Over the centuries, Zakynthos has produced highly significant personalities, whose contributions have shaped the Zante island’s cultural image and influenced the life of recent generations in more ways than one. The blossoming of literature on the island was evident by the 15th century, when many writers and poets were acquiring fame for their poetry and prose. Nikolaos Loukanis a poet and translator of Homer’s Iliad, was one of the most famous literary personalities of those times and in the 16th century, the first Greek Academy is established in Zakynthos. Interaction with cultures in Europe and Crete has influenced the Zakynthian literature a lot, it loves to praise the importance of religion, country, woman and nature.

The peak of the islands cultural development is reached in the 19th century with the birth of Andreas Kalvos, Dionysios Solomos, and Elizabeth Moustan – Martinengou. Elizabeth was one of the first Greek woman authors to have a place in the man dominated literary history, thanks to her high important. Andreas Kalvos composed twenty classical “Odes” that were innovative poems, filled with a musical character and inspired by the Greek war of independence of 1821. He and Dionysios Solomos used many elements of demotici, what was the language of the working class. His verse “Freedom requires courage and virtue”, will inspire peoples struggle for freedom in many years to come.

Dionysios Solomos (8 April 1798 – 9 February 1857), national poet of Greece, studied and lived many years in Italy, but also divided his time between his beloved Corfu and Zakynthos island. His works has a lot of passion for “freedom and speech” and the prose “Woman of Zakynthos” has been classified as one the finest examples of Modern Greek literature. In 1864 the versus of his poem “Hymn to Liberty” became the Greek National Anthem. Another highlight of his work is the poem “The Free Besieged”, dedicated to the fighters of Messaloghi.

In 1821, in West Greece at a Village called Mesologhi, were a handful of villagers for many months trapped in an old castle, surrounded by the Turks. They fought with pride and courage but could not escape the result of no incoming food and water. In the end they decided to come out with a Heroic excodos, the march of the Heroes, because even the smallest children would have sticks and stones in their hands to throw at the Turks (It was then that Dionysios Solomos heard then cannons of Mesologhi and wrote all his frustration and pain in his famous poems). Needless to say that after this massager, there was no living soul to tell the tail. It was this story that was told by the secret revolutionary organization called “Filiki Eteria” (Association of Friends) that made the Greeks to pick up their weapons and fight for their independence. One of the major figures of the Filiki Eteria was Kolokotronis who lived on Zakynthos at that time. 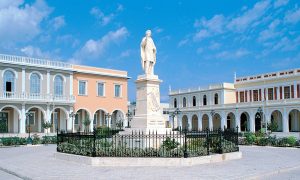 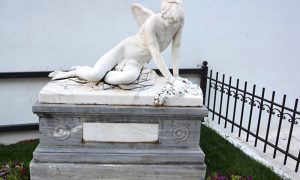 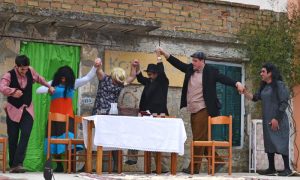 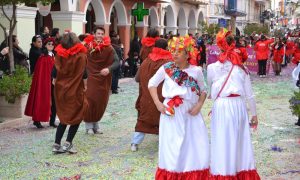 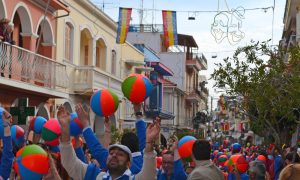 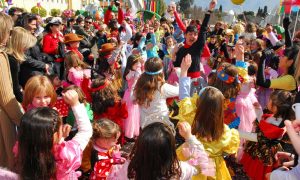 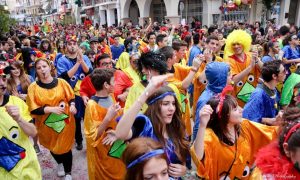 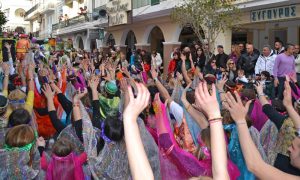 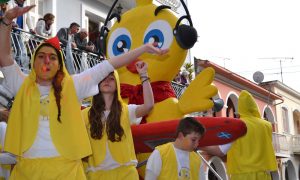 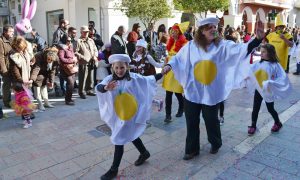 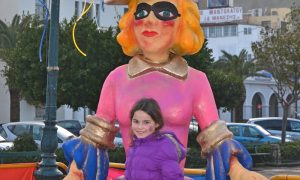 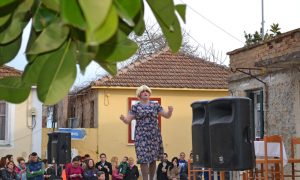 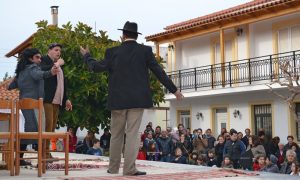 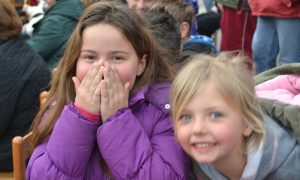 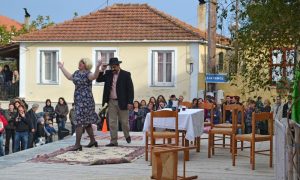 The local music of Zakynthos, also known as Zante

Music and songs have always played a big role in the lives of the Zakynthians. In antiquity they worshipped Apollo, the god for Music, art, and Light. It was in these times that a local Zakynthos musician called Pythagoras created a variation to the Lyre, only this instrument had 7 strings. They expressed their love for music by minting a coin, whose one side depicted Pythagoras and the other side his famous lyre.

The folk music from Zakynthos is called Kantades, sweet romantic melodies with a feel of Italian belcanto and Cretan Arekia. The word Kantades comes from the Italian verb “cantara” which means “to sing”. The Kantades were sung by man under the bedroom window of a girl to express his love for her. Kantades were written for four voices in harmony, accompanied by guitar and mandolin. They are totally unique to the island and are often still sung in local taverns and at family celebrations. Kantades are sung in chorus. The first music school was established in 1815 by the Italian professor Marco Batajia and the Philharmonic of Zakynthos, established in 1816, is considered to be the oldest in Greece.

The Zakynthos Zante Opera and Operetta

There is still a big love for Opera and Operetta on the island of Zakynthos, also known as Zante, and no bigger shame to sing a false note in these productions. It’s even claimed that the try outs for Opera and Operetta were taking part in the famous old Theatre (no longer present) on the, what we now know as, Dionysios Solomos Square. If there was enough applause, then it was good enough to be played in Venice. The name Little Venice or Little Paris, was given by many visitors to Zante and very rightly so. The island of Zakynthos, was overflowing with wealth, beauty, education, art-lovers and good taste. It is because of this that in these times Zakynthos was seen as the Centre of Culture of Hellenism.

The Theatre on Zakynthos Zante

The Zakynthian passion for a black sense of humor, which most probably helped alleviate the oppression of the gentry, led to the creation of a particular type of Zakynthos theatre, known as the Discourses/Dialogues the “Omilies“. They are folk poems with theatrical structure, written in fifteen syllables, which rhyme on every second line. Imitations of the Cretan Theatre, which the Cretans brought with them upon their arrival in Zakynthos, after Handakas (Heraklion) in 1669, had fallen in the hands of the Turks. That is why the Omilies is very similar to oeuvres of Cretan Literature. They are considered to be the most authentic and complex form of Folk Theatre. Their main characteristic is that all roles of both males and females are played by men. The “Omilies” are usually staged by amateur actors during the carnival, with topics and satire about every day life and politics.

Elements which characterize the substance of the Zakynthians, are the traditional customs which are called “Andetia”. The Andetia are customs and habits which are maintained from generation to generation with piety and are perpetuated. Until the beginning of the 19th Century, the Zakynthian carnival was very famous and visitors from the Peloponnese and from around the country came to this event onto the island. Thereafter, the tradition gradually fell into oblivion until it was successfully revived in recent years. In the villages they rehearse the Omilies from Christmas on, and on carnival – from the Thursday before Carnival (Tsiknopempti) until Cheese Sunday (Kyriaki tis Tyrinis) they perform them. Carnival starts every year on the Sunday of the customs officers and Pharisees, the fifth Sunday before lent. In the three weeks prior to carnival Monday people stop eating meat (Latin carne = meat and vale = goodbye), they are followed by 40 days of fasting, which are called “Sarakosti”, in preparation for Easter.

Sunday (Tou Asotou – Gourounokyriaki): The proclaimers go through the streets and announce the beginning of the Zakynthian carnival. This is followed by the days of the omilies and village funfairs.

Thursday before Carnival (Tsiknopempti): The King of Zakynthos Carnival enters into the capital of the island. In the afternoon the meat is roasted on the bbq, tsikno means the smell of the burning meat and pempti is Thursday.

Second Sunday – Piccolo Carnival: “Piccolo” means little ones. The parade for and done by the children of Zakynthos.

Last Sunday: Big Zante Carnival parade with many satirical sketches. Two old Zakynthian traditions were revived in recent years: the “Giostra” – a sporting contest on horseback, and the “Venetian Wedding”, both with gorgeous costumes and masks, and with lively participation of the population. Even the special carnival dance, the so called “Gaitanaki” is performed again. The day ends with the burial of the mask (Povero Carnival).

Kathera Devtera – Clean Monday: During the last week of carnival, you can buy kites everywhere. Now on a Clean Monday, people go up to the hills and let them fly. If the weather allows it, a picnic will also take place – as a last dining experience before lent.

Sarakosti is the oldest of the major fasts of the Orthodox Church. It was established in the 4th century. Originally it lasted six weeks, later the seventh week was added. It is so named because it is exactly forty days from Kathara Deftera – Clean Monday – to the Friday before the Saturday of Lazarus. It is called Megali – Big – not for the long period, but for the importance of that which it commemorates, the Suffering of Christ, and is preparing the faithful for the great feast of Easter. The habit of fasting is very old, to imitate the fast that Christ did in the desert. Sarakosti passes slowly for those who are fasting, especially the last days. So, because they did not have calendars like we have today, to measure the passage of fasting, they would make a measure-of-time. They would take a piece of paper and paint Sarakosti as a nun, Kira-Sarakosti. They don’t put on a mouth, because it represents fasting. Her hands were crossed from prayers. She had seven feet, one for each week of the Sarakosti. Kira Sarakosti would be hung on the wall. Every Saturday one of her legs would be cut off. The last leg would be cut-off on Megalo Savvato – Big/Holy Saturday – and would be put in a dried fig or a nut, whoever found it was believed that they would be lucky. Elsewhere Kira Sarakosti would be made of material and filled with feathers.